Commitments to cut climate-altering pollution has, and continues to, stimulate new fuel oil regulations, particularly for the marine industry.  IMO 2020 was one such regulation, introduced on 1 January 2020 and affecting not only the marine fuel market but also the petrochemical refinery industry.

On 1 January 2020, the global limit on sulphur content for marine fuel oil was cut from 3.5% to 0.5% by weight, representing the largest reduction in sulphur content for transportation fuel ever. The aim of this limit was to reduce the emission of sulphur oxides (SOX), leading to far-reaching environmental and human health benefits.

The marine sector is responsible for approx. half of the global fuel oil demand. As such, the new limit had an immediate and direct impact on oil refiners. Much of the “bottom of the barrel” heavy fuel oils typically used in shipping were no longer compliant, so refineries were required to adapt their processes to meet the increased demand for compliant fuels such as distillates and Very Low Sulphur Fuel Oil (VLSFO).

Throughout 2019 the global shipping and refining sectors were awash with speculation about how IMO 2020 would affect fuel markets when it came into force. In normal times, the shipping industry was estimated to consume about 4 million barrels per day of marine bunker fuels, accounting for about 2.2% of all greenhouse gas emissions and 2.1% of CO2 emissions.  IMO 2020 had a potential impact on 50,000 merchant vessels globally.

These regulations meant that the shipowners affected had to carefully select their strategy. Do they install Exhaust Gas Scrubbers to remove the sulphur content from an engine’s exhaust if High Sulphur Fuel (HSFO) is used; switch to alternative fuels (for example LNG), or use low sulphur fuels?

No sooner had the new rules commenced when the market had to urgently confront two simultaneous black swan events. The Russia–Saudi Arabia oil price war triggered a sheer drop in the price of crude oil, followed by the world being gripped by the deadly coronavirus pandemic, which interrupted global trade flows and caused a rapid decline in demand for refined petroleum products. This initially resulted in many refineries simply blending High Sulphur fuel oil (HSFO) with distillates fuels to achieve the 0.5% sulphur content that IMO 2020 demanded. This also had the effect of keeping the cost of VLSFO low.

Before these events, there were large order lists for exhaust gas scrubbers to be retrofitted to vessels. According to a recent report published in March 2021, the scrubber payback period ranges from one to three years for a large vessel based on a light-heavy fuel oil price differential of between US$15 and US$23 per barrel. However, the difference between the cost of VLSFO and non-compliant HSFO collapsed in early 2020.  Also, many of the scheduled retrofits were impacted as shipyards closed due to COVID-19. Combined, this resulted in many Shipowners abandoning plans to install scrubbers and instead move to usage of VLSFO.

How things can change in the space of a 12 – 18 months. The spread between the cost of VLSFO and non-compliant HSFO is now about US$ 100 per tonne on average (approx. US$ 10 per barrel) which, although is still below the US$150 differential often cited as the minimum necessary in terms of scrubber payback, again makes scrubbers a possible worthwhile investment. There have, however, been new regulations introduced covering scrubbers and many ports worldwide have now banned the use of open-loop scrubbers; much debate remains regarding the disposal of the sulphur and other contaminants (residue) from the holding tanks of closed loop scrubbers.

Scrubber manufacturers of course have met these challenges by designing improved, or hybrid, closed loop scrubbers, but it all simply adds to the cost borne by the shipowner. Latest figures show the number of scrubber installations as less than 4,000 – equating to the approximate equivalent of just 3.9% of the worldwide fleet.

IMO 2020 was predicted to lead to an avalanche of claims relating directly to fuel compliance, scrubber performance and scrubber wash water issues. Whilst there have been disputes and insurance claims, the volume is surprisingly small, due to the unexpected COVID-19 improvement in bunker quality, with better streams coming ex-refinery and less blended fuels.

Quality issues pre-IMO 2020 tended to relate to excessive catalytic (cat) fines in the fuel or contaminants such as fatty acids, phenol, styrene, excessive asphaltene or other non-petroleum contaminants. The introduction of IMO 2020 has had little or no effect on these.

There have always been claims regarding the quality of marine bunkers, particularly for heavy fuel oils (HFO) derived from the residue left at the end of the crude oil refining process. As the refining process has improved in efficiency over the years, extracting more of the valuable lighter hydrocarbons, so the quality of the HFO supplied to vessels has decreased as the “bottom of the barrel” residue consists of less of the lighter hydrocarbons. The introduction of IMO 2020 demands increased fuel quality and has, to an extent, reversed this trend. The result has gone some way to reducing claims relating to bunker quality.

The debate goes on

18 months on from the introduction of IMO 2020, widely reported figures would suggest that the shipping industry’s compliance with the regulations have surpassed all expectations, with VLSFO currently emerging as the preferred solution. This mainly due to the narrow VLSFO/HSFO price spread.

The fuel oil debate however is far from over with the IMO Green House Gas (GHG) strategy aiming to cut CO2 emissions for vessels by 40% by 2030 and by 70% by 2050 from the 2008 levels. Many shipping companies, engine manufacturers, classification societies and some countries are already looking into alternative fuels such as liquefied natural gas (LNG), liquified petroleum gas (LPG), methanol, hydrogen, ammonia, biofuels and fully electric.

All these alternatives have a mix of advantages and disadvantages with regard to their production, availability, energy density, ease of storage and bunkering infrastructure, and not least cost.

Cost will inevitably be the key driver/barrier for the uptake of any alternative fuel and, as the debate goes on, it is unlikely that any major uptake of expensive alternative fuels with significant GHG reduction can be expected until either mandated or heavily incentivised. 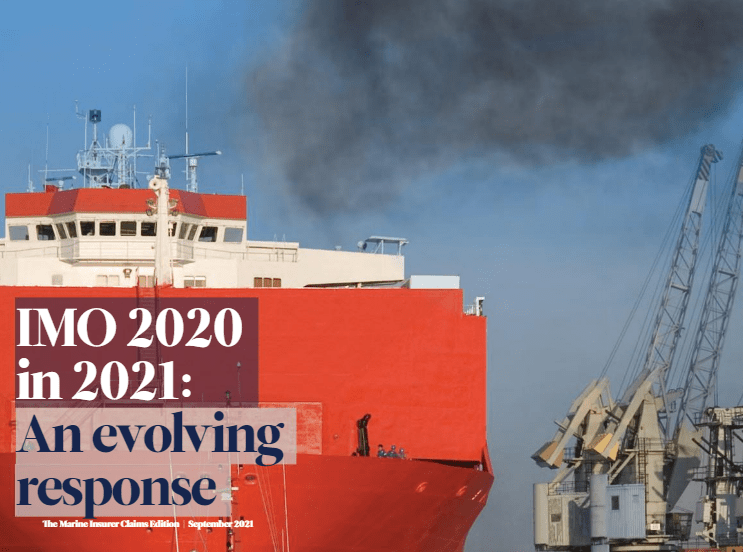